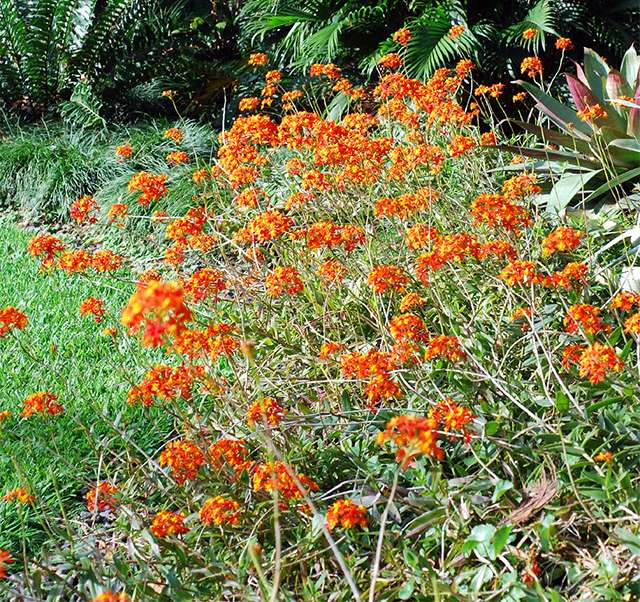 We already have a page for “consumer education”, where we cover topics like “monkey” orchids, “blue” orchids, “black” orchids, “ice” orchids and more, but it was getting long so we decided to add new material here instead. We’ll cover different topics on this page, with the intent of helping you understand some common misconceptions, urban legends and more.

We get a lot of inquiries about this, “do you have ground orchids”?, and more often than not the caller isn’t really sure what he or she is actually asking about. So we want to offer some enlightenment, if we can, on this topic. Note that we sometimes have some of these plants available at the nursery, even if they are not listed in our online catalog.

Most cultivated orchids are epiphytes, their natural habitat is in the branches and on the trunks of tropical and subtropical trees. But some orchids from the tropics and subtropics are “terrestrial”, meaning they naturally grow in the ground. (All temperate-zone orchids are terrestrial.) Some of these orchids are available in nurseries and they make good subjects for tropical landscaping, or in containers in climates where winters are too cold for them. We’ll summarize several of the most common types here, so when you are looking for “ground orchids” you can ask for them by name.

Epidendrum radicans This is one of the “reed stem” epis, native to Mexico where it can be a roadside weed. The orange-flowered plants are scrambling with lots of aerial roots. Plant them in a sunny, well-drained location and they’ll reward you with flowers for months. Note: not all of the similar “reed stem” epis are terrestrial; many of the brightly-colored hybrids (red, yellow, lavender, pink) are semi-terrestrial and more suitable for containers than for landscaping. 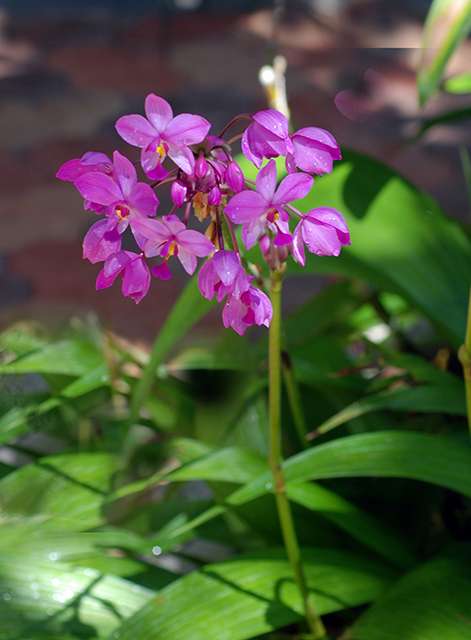 Spathoglottis There are several species and some hybrids available, the most common is the lavender-pink Spa. plicata. They have very attractive foliage and the plants are sequential bloomers, producing flowers over a long period of time. They want bright light (not full sun all day, however) and good drainage. Spa. unguiculata has dark purple, grape-scented flowers; it’s a smaller plant than plicata and fussier to grow. Several yellow-flowered species are sometimes available as well; note that some of the yellow-flowered species are deciduous during their winter resting period. 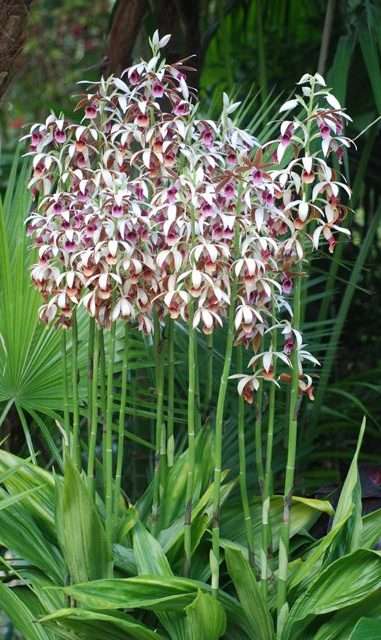 Phaius, Calanthe and hybrids From Asia, these are sometimes known as the “nun” orchids and they can be quite large plants. They want a moist, shady spot in the garden, and they bloom in the late winter or early spring. Snails love the lush foliage, so be aware of that and apply snail bait if you see damage. 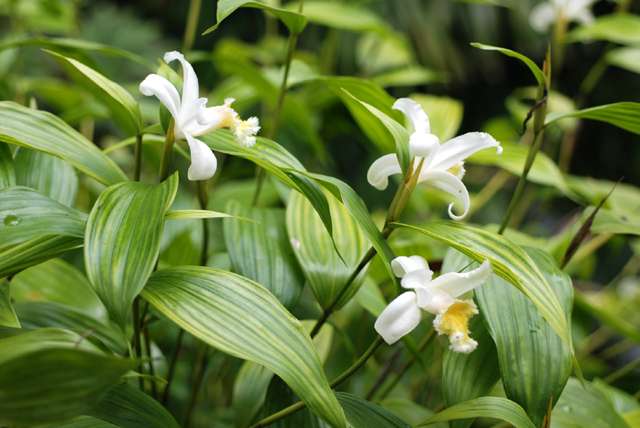 Sobralia This is a genus of incredibly beautiful terrestrials from Central and South America. The flowers resemble Cattleyas, but they are very short-lived. Most Sobralia flowers only last a single day, although the plants may produce flowers for several days, several times a year. Some are quite large plants, leafy and handsome even when not flowering. They are not as common in cultivation as the other orchids listed above, we rarely have them.

Terete “vandas” Technically these are not terrestrials at all, but they can be trained to climb on a tree or fence. Eventually the lower part of the plant dies back so they are no longer growing in the ground. 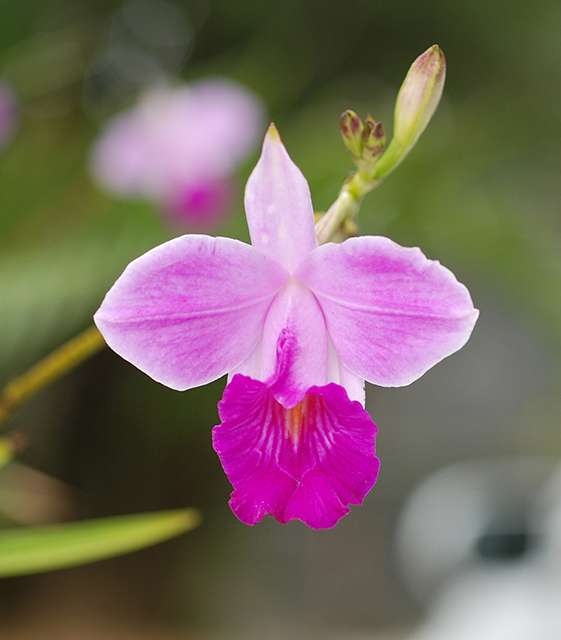 Arundina  Also from Asia, this is the “Bamboo orchid”, Arundina graminifolia. They are usually tall plants with grassy foliage on bamboo-like cane stems, and medium-size pink and white flowers resembling small Cattleyas. They will grow in full sun and need good drainage. Plants can be propagated from keikis on the stems.

Pleione These are cool-growing terrestrials from Asia. You may see “bulbs” for sale in garden centers (we don’t carry them), but they are unsuitable for subtropical gardens.

Bletia Many species, native in Florida, the Caribbean, Central America. Common in the Everglades, not common in cultivation. We don’t sell them.

Other terrestrials, some of them native orchids, include species of Calopogon, Habenaria, Platanthera, Spiranthes, but these plants are usually protected and uncommon in cultivation. Occasionally plants of Cyrtopodium andersonii are available, too.

We get a fair number of inquiries about this, too, and indeed, recently got a call from someone who actually argued with us when we explained that an “orchid tree” is not an orchid at all. Just because the common name is “orchid tree”, don’t believe for a moment that the plants are even remotely related to orchids. They have that common name because the flowers, to some eyes, superficially resemble orchids. In fact, “orchid trees” are one or another species of Bauhinia, a genus of flowering trees. There are more than 500 species of Bauhinia around the world, and a few dozen are cultivated as ornamental plants. 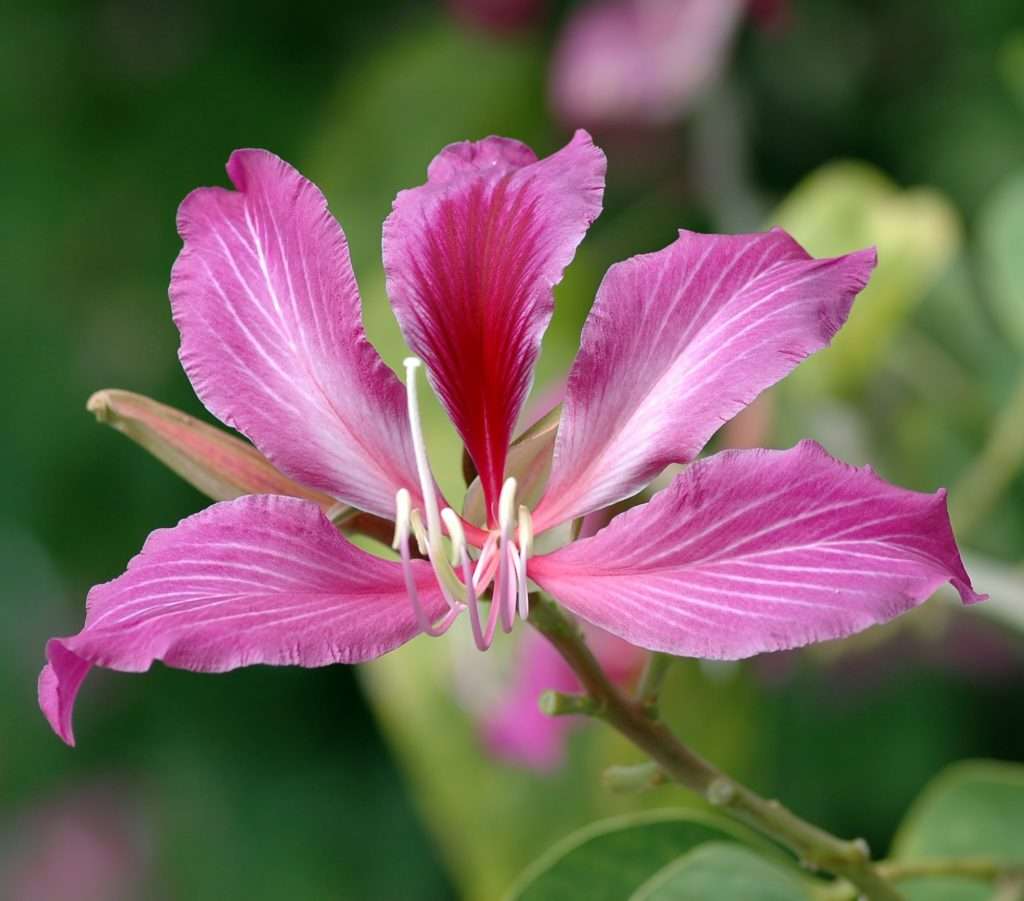 The “orchid tree” or “Hong Kong orchid tree” is a hybrid, Bauhinia × blakeana, popular because – unlike most Bauhinias – it’s sterile and doesn’t produce messy seedpods. So no, it isn’t an orchid and we don’t sell it; you might find it at nurseries offering tropical flowering trees or shrubs.

(an interesting factoid: the Bauhinia flowers are very attractive to several of the naturalized populations of amazon and conure parrots in South Florida; the birds flock to the trees to feast on the flowers, making a mess and a racket as they eat)

This is more internet nonsense, and the story makes the rounds every few years.: “Rare parrot orchid from Thailand…” (with a photo). Let’s set this straight… the plant exists, but it isn’t an orchid. It’s Impatiens psittacina, sometimes called “parrot flower”, and it is native to Thailand and some other parts of southeast Asia. Repeat: not an orchid, and no, we don’t sell it.

Now ordinarily we’d include a photo but this time we weren’t able to find one we could include here (none in Wikimedia Commons), because of copyright issues. If you have an image of Impatiens psittacina (and you own copyright on it) that you’d be willing to let us use here, with attribution and copyright notice, let us know. Otherwise a quick internet search will turn up dozens of photos. 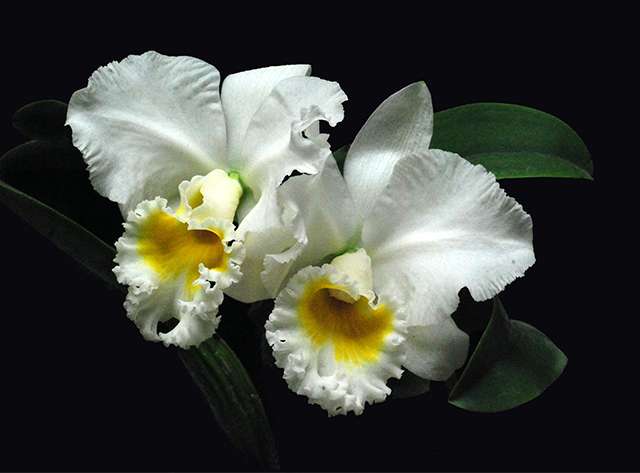 Here in South Florida we have a lot of folks of Cuban descent, so we get a lot of inquiries about “the Cuban orchid”. The orchid these folks are usually looking for is a white hybrid cattleya-type flower, which, while very beautiful and usually fragrant, isn’t remotely Cuban. We’re not honestly sure where that designation originated, quite possibly from the flower displays of a white hybrid, C. José Martí, at a famous Cuban botanical garden (Soroa Orchid Garden, administered today by the University of Pinar del Rio). Of course there are plenty of orchids in Cuba – nearly 500 species – but no cattleyas. There are some catleya-alliance orchids such as Encyclias and related plants, also lots of Oncidium-relatives, but no native cattleyas. Certainly no large-flowered cattleyas. Any plants of this type are hybrids, not natives at all. This is a white hybrid, C. Burdekin Wonder ‘White Snow’ with similar ancestry, (and no, sorry, we no longer have any of them in inventory but we like the image as an example).