The Way We Were 4

Bob’s grandfather, Fred Sr., passed away in 1967. His health had deteriorated and he had been unable to maintain the shadehouses of Orchids Buy Fuchs, his small orchid nursery business. The houses were in disrepair and the plants were in bad shape.

Grandmother Louise (“Weesie”) Fuchs offered Bob these shadehouses for his personal collection of orchids and as the start of his own fledgling orchid business. A lot of work followed, to clean up the houses, build new benches and get things set to rights.

Bob attended Florida State University, graduating in 1970, and began teaching at Homestead Jr. High (now Homestead Middle School), eventually becoming chairman of the school’s Enrichment Department. The 1970s were a tumultuous time in local public schools and there were no student organizations or clubs.

Bob sponsored the Student Council, and the group took on some projects, including landscaping the campus with donated plants and trees. For the 1976 Bicentennial, students painted the local fire hydrants red, white and blue. “At class time, I would take groups of them out in my van, drop them off at hydrants with paint and brushes, then pick them up after thirty minutes to come back to school,” Bob says. “Imagine doing that today!” 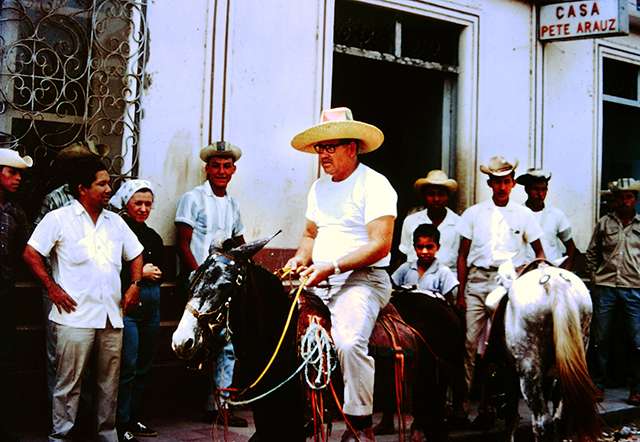 He continued to travel to South and Central America to explore and collect orchids, although these adventures were constrained to summers and school breaks. Sometimes he joined one of his father’s collecting trips, sometimes he went on his own, and his personal collection of orchids continued to grow.

Bob’s new orchid business, R.F. Orchids, opened in December, 1970, for a weekend “open house and sale”. A few customers came, mostly out of curiosity to compare Bob’s small nursery with his father’s better-known operation Fuchs Orchids in Naranja, a few miles away. The business was open only on weekends at first, and whatever proceeds came in from plant sales, Bob turned them right back into the nursery.

His interest in vandas and related orchids continued to grow. Fred Sr. had grown many vandas, importing plants from Hawaii, and Bob became intrigued by these beautiful orchids. Vandas and their relatives bloom in the widest range of color and pattern, many of the hybrids are extremely floriferous, many are very fragrant as well. So Bob imported seedlings from Hawaii, took divisions of selected plants from both his Grandfather’s and Father’s collections, and added them to his nursery. He also imported plants from Thailand’s Boonchoo Orchid Nursery and T Orchids, to use in his fledgling breeding program.

As the business began to grow slowly, Bob hired some local students (in the school “Earn and Learn” program) to help with the continuing project of cleaning up and updating the shadehouses, building new benches and whatever else needed to be done. Bob continued to teach school, earning a salary of $3,200 a year. Maternal Grandfather Casper Williams loaned him $500 for a down payment on a new 1970 Mustang, which cost $2,100 from the showroom floor.

In 1972, Bob’s brother Richard (“Dick”) built the structures that would become the business office and “sale house” area of the nursery, and Grandmother Weesie gave Bob the two acres of land where the nursery is located today.

The nursery was open on weekends only at that time. Bob took a part-time weekend job at the Snook Family Flower Farm, located at the north end of Green Thumb Nursery in South Miami, a garden center that specialized in bedding plants and cut flowers. The Snooks allowed Bob to sell a few orchid plants on the side, and he began to build a clientele from Green Thumb’s South Miami and Coral Gables patrons. R.F. Orchids continued to grow, staffed by a skeleton crew of students and friends who held the fort on weekday afternoons and Saturdays. 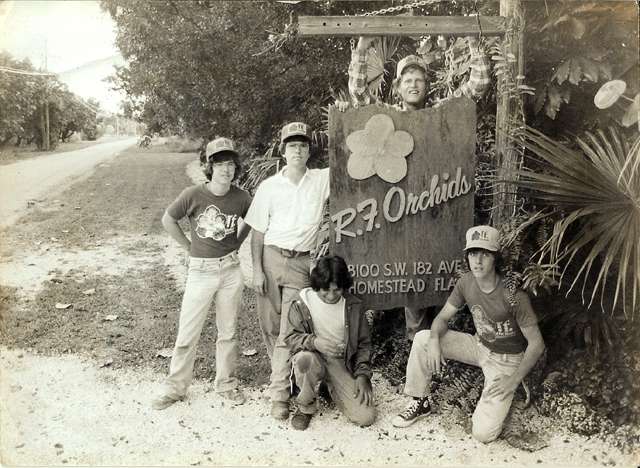 In 1977 Michael Coronado started working at the nursery, and over time he would take over running R.F. Orchids in the afternoons and on weekends, while Bob continued working in South Miami on Saturdays. Meanwhile, Bob had been making his own hybrids and some of those orchids began to flower.

During the 1978-79 school year, Bob was voted Teacher of the Year by his peers. He considered it a very great honor. Some of his students remain in contact with him to this day.

Weesie Fuchs passed away in 1980, and Bob was able to purchase the three acres of property fronting Robert’s Road. Fred Jr. had sold the west five acres to the Rutzke family, and some years later Bob was able to buy back those five acres, reuniting the pieces of the original 1921 ten-acre parcel. With the additional land, R.F. Orchids was able to grow. Bob continued to import vandaceous orchids from Asia, and species from South and Central America. 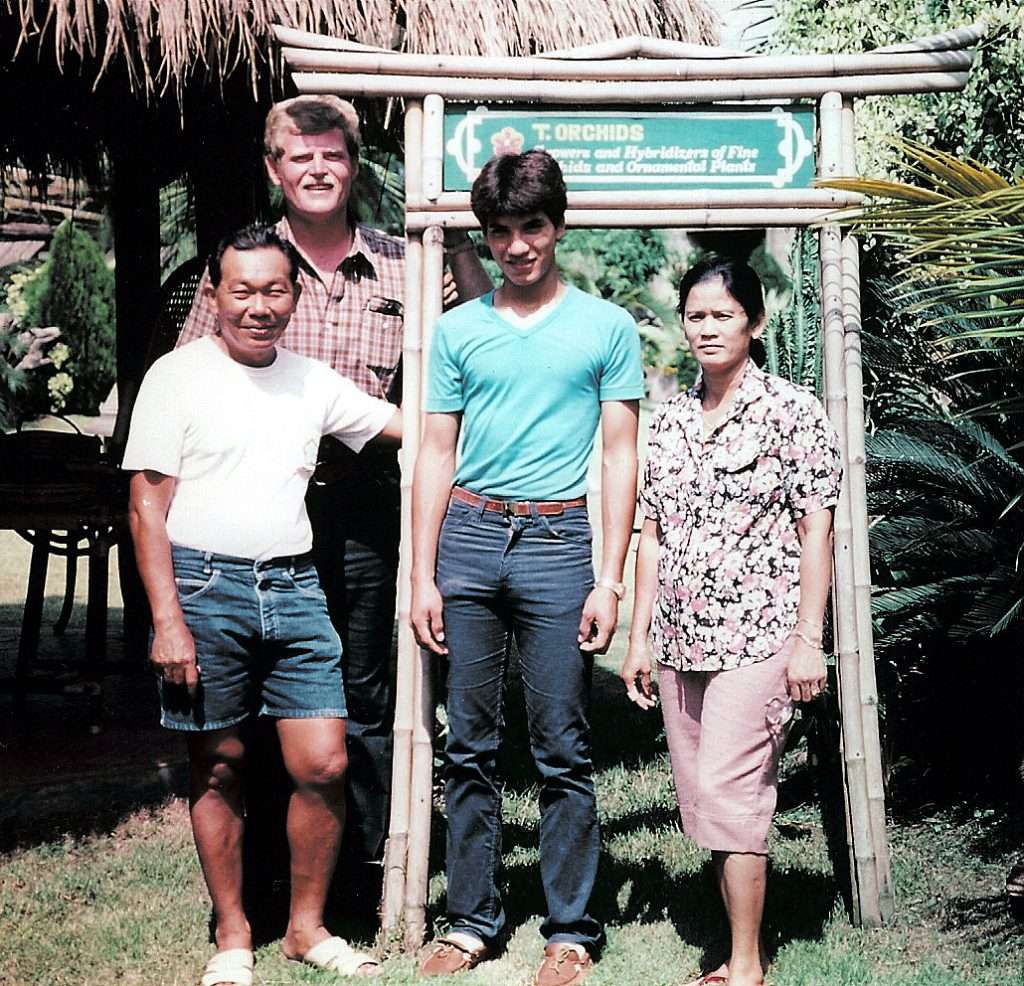 Bob and Mike at T Orchids

In 1983, Bob, with Michael, John and Vivian German, Dorothy Bennett and Barbara Ansley, planned a trip around the world on the legendary Pan American Airlines flights 1 and 2. They left Miami for London, flew on to New Delhi and Bangkok. Then it was on to Manila and Honolulu before returning to the US. In Bangkok, they spent time with several well-known Thai orchid growers, including Kasem Boonchoo, Thonglor Rakpaibulsombat of T Orchids, and Keeratikul Sophonsiri of Kultana orchids. The Thai growers were generous with their ideas about hybridizing, and it was quite a learning experience for both Bob and Mike.

While in Hawaii, they visited a number of prominent growers including Ben Kodama, Richard Takafuji and Roy Fukumura, and spent some fascinating time sitting under Roy’s mango trees talking about vandas. Bob was to become good friends with these legendary Hawaiian orchid growers.

Also in 1983, Bob was a Vice President and Show Chairman for the South Florida Orchid Society. That year, SFOS moved the location of its annual Miami International Orchid Show from Miami’s Bayfront Auditorium to the Dinner Key Auditorium in Coconut Grove, in anticipation of the 11th World Orchid Conference in 1984.