The Way We Were 2 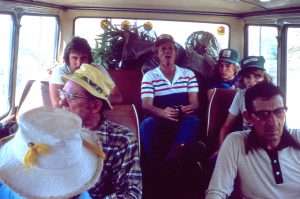 Back in the Day

Time was, you didn’t need CITES documents and all that official stuff in order to collect orchids in the wild. A simple US import permit was all you needed, and you could head out into the jungle and haul out as many orchids as you – or your porter – could carry. Of course you had to make travel arrangements, and getting to and from the collecting location could be an adventure in itself, but the rewards were likely to be terrific. Definitely not luxury travel, but for serious orchid people this was their kind of “roughing it”.

Fred Jr.’s participation in orchid shows and judging garnered him a large number of international orchid friends, many of whom invited him to visit their orchid ranges and to go on collecting expeditions. Land was being cleared in many places, and the fallen trees were thick with orchids and other epiphytes. If someone didn’t remove the orchids, they would be destroyed when the trees and other vegetation were burned. Fred accepted some of these invitations and by the mid-1950s he had begun collecting in Central and South America. He had good connections in Guatemala, Nicaragua, Honduras and Panama, and later in Peru, Bolivia and Brazil. His connection in Brazil was the reknowned Brazilian orchidist Jorge Verboonen, whose nursery, Orquidário Binot, was world-famous. Fred’s first collecting trip was to Brazil, at Verboonen’s invitation. 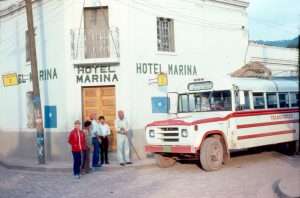 Bob was only 14 when he went on his first international collecting trip, accompanying his father and Marlow Jacobson, a Homestead neighbor, to the Dominican Republic in 1960. Their charter flight plan listed Santo Domingo as the port of entry, but the aircraft ran short of fuel and the pilot needed to land at Santiago instead. There was no answer from the Santiago tower, but, low on fuel, the pilot landed anyway. Armed soldiers met them on the runway, waving machine guns. Freddie’s peace offering, a bucket of Kentucky Fried Chicken, seemed to resolve this international incident without any shots being fired. After meeting with Dominican authorities, Freddie, Marlow and Bob were allowed to collect orchids for three days. They remained in the Santiago area and collected many plants of Oncidium (now Tolumnia) henekenii. Bob remembers exploring a dry ravine in the area, full of hundreds of the plants, all in bloom.

Fred and Barbara began a business, Orchid Collectors, Inc., in the 1960s with Marlow and Millie Jacobson. They organized collecting trips for orchid growers, and the response was good. Their itineraries typically visited locations in Central and South America, particularly Nicaragua and Bolivia, but other destinations were on the list, too. Fred’s orchid connections there assisted with the travel arrangements. 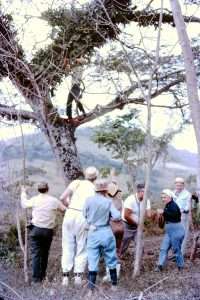 Nicaragua was high on the list of preferred destinations. Hubert Cross, Nicaragua’s largest automotive dealer, invited Fred to collect orchids on land being cleared for roads. Bob accompanied him on many of these collecting trips, and they rescued large quantities of orchids from the trees felled by the road-building crews. In 1967, he found the specimen plant of Brassavola nodosa which would, three years later, receive the AOS’s highest award for flower quality, the First Class Certificate. B. nodosa ‘Susan Fuchs’ FCC/AOS, was Bob’s first FCC. Bob actually spent six weeks of a 1974 summer break in Nicaragua, collecting orchids and, in the company of Wilfred Fernández, an ornithologist with the University of Miami, collecting birds as well.

Three orchids bear the Fuchs name, discovered by the Fuchs men during these collecting expeditions.

From Nicaragua, Myrmecolaelia × fuchsii, a natural hybrid of Myrmecophila (Schomburgkia) wendlandii and Laelia rubescens, was discovered in 1978 near Esteli. Bob recalls that they were collecting on a ridge, and as he walked back to the vehicle he noticed a clump of pink somethings – flowers? – on a rock outcropping. When he climbed the rocks, he discovered a 5-ft. wide orchid plant in full bloom. The flowers resembled two local species, and he was confident it was a natural hybrid of the two. He collected 8 front-bulb divisions, and some flowers (which he pressed). After returning to Homestead, he sent the flowers and one of the divisions to Marie Selby Botanical Garden for identification. His hunch was confirmed, the plant was indeed a natural hybrid, previously undescribed. The orchid was named Schombolaelia fuchsii, and the description was published in Icones Plantarum Tropicarum. Two years later, when he returned to the area, he found that the land had been cleared and the plant had been destroyed by fire. Fortunately the collected divisions grew well, Bob selfed them and raised a population of the progeny. 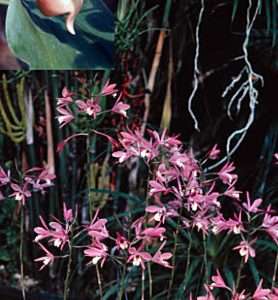 Among other orchid connections in Peru, Fred sometimes stayed at Lee Moore’s (“the adventurer”) bed and breakfast near Tingo Maria on the eastern flank of the Andes. There, Fred discovered Masdevallia fuchsii, high in the cloud forest.

A special connection was Dr. Luis Moreno in Santa Cruz, Bolivia. In 1970 he contacted Fred to tell him about some very unusual Oncidium-like orchids, which would later be described as a new species, but this is another tale for a different chapter (stay tuned…). Many collecting trips were organized around this area of northeastern Bolivia. On one of them, Fred discovered a new species of Catasetum near Santa Cruz, and the plant was named Catasetum fuchsii in his honor.

Among the cardinal rules of collecting was to take only a portion of the plants that you found. Never, ever take the whole clump, unless it was growing on a tree that would be burned for land clearing. If it was growing on an uncut tree, leave enough of it to continue growing.

The 1975 implementation of the CITES treaty protecting endangered species put a damper on collecting orchids in the wild. The treaty restricted international commerce in wild-collected orchids (and many other plants and animals), so it was no longer possible to collect plants and bring them back to the U.S. without special export permits from the host country. These permits were issued to allow limited collecting in areas where the forest was being cleared, but after a few years even these permits were no longer available and wild-collected orchids became a thing of the past. The irony of this treaty is that the orchids are protected from commerce, but no longer protected from habitat destruction. Who knows how many undiscovered species have been destroyed in the name of progress? 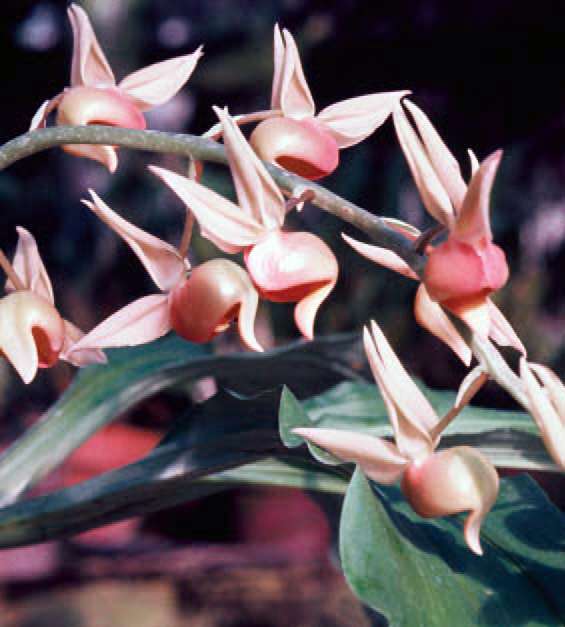 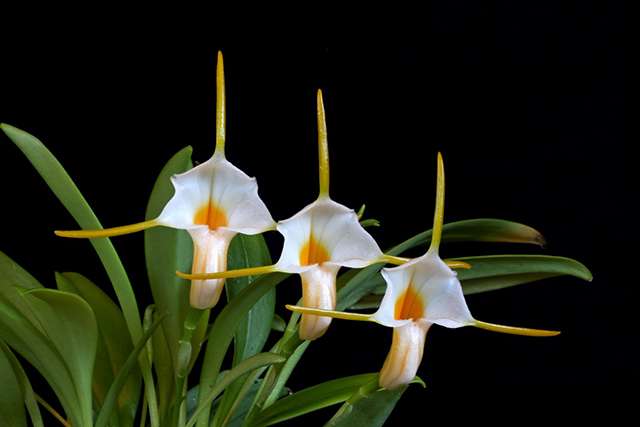